Dinner for the poor in North Walsham to celebrate the occasion of The Coronation of William IV.

"In the early part of the week a subscription was entered into by the spirited inhabitants of North Walsham to provide a sumptuous dinner for the numerous poor of this loyal and improving town. A committee was formed who collected, almost instantly, lOOgns, with which they provided 220 rich plum puddings and 80 stone of prime beef.
At two o'clock 1,200 poor men, women and children sat down at 20 tables arranged in the Market Place. A President and vice-president were appointed to each table with numerous waiters taken from the respectability of the town. At the upper table we observed the Hon. Col. Wodehouse, J. Petre Esq, the Reverends Atkinson, Wilkinson, W T. Spurdens and William Rees. The dinner passed off with as much order and regularity as we ever observed in a public dinner of the higher orders. At least 4000 persons were present and it gratified the heart of every kind and benevolent mind to see how much of the best feelings of human nature may be brought forth from the very lowest orders of society when their comfort and welfare are attended to by those above them. During the dinner several pleasant and joyous tunes were played by the North Walsham Band and after dinner a variety of loyal toasts were given by the principal chairman and drunk enthusiastically by the people who were supplied with 11 barrels of strong London Porter together with pipes of tobacco. At five o'clock in the afternoon the people left the Market Place and enjoyed themselves with rustic sports until dark when the whole town was illuminated. At eight o'clock a most splendid bonfire was lighted in John Sharpe's field.
It gives us pleasure to add that not the slightest accident occurred throughout the day and that the populace conducted themselves with the utmost propriety".

On the 28th February 1887 a meeting was held at the Church Rooms to discuss how the town was to celebrate the Jubilee of Queen Victoria on the 21st June. It was decided by a show of hands that a dinner and sports should be provided for all the poor of the parish. The committee collected donations and obtained particulars of the people likely to attend. Three weeks before the event tickets were distributed at the Church Rooms.
The Committee also discussed and agreed that a tea be given at the Corn Hall for aged women who might be 'unable to bear the fatigue' of attending the dinner and sports. This was made the subject of a special collection and management by several ladies of the town.

The Market Place was the venue for the dinner, 36 tables, 50ft long were set up each accommodating 60 people. Every table had a steward, 3 carvers, 4-6 waitresses and 2 beer carriers. Each group of helpers was distinguished by a different coloured rosette and those acting as waitresses wore white aprons.
The meal consisted of cold beef, two thirds roast ribs and rump and one third boiled and briskets. The butcher supplied 190 stone at 8/2d per stone! With the beef was served bread and pickles with condiments. An allowance of 1 pint of beer per man and half pint per woman was decided upon and Ginger-beer for teetotallers and children. The beer was stored in the Market Cross until the day of the dinner and put on the table half an hour before the meal began. Plum Puddings, made from the following ingredients were served hot:-
31b flour...31b breadcrumbs..21b stoned raisins...lib sultanas... 31b currants...lib candied peeL.loz mixed spice.. 21b sugar.. 12 eggs..31b suet..l quart milk..
These quantities made 21 lbs of pudding costing 4d a lb. Ladies were invited to make the puddings at the Corn Hall and about 60 attended on two separate days about a fortnight before the dinner when over 230 puddings, weighing about seven lbs. each were made. The puddings were boiled in coppers belonging to various people in the town and reheated in the same coppers on the day of the celebration (What a tremendous task this must have been!).

The Recreation Ground was roped around and arranged for Races, prizes amounting to £12.10.0. were given. The committee had decided on a Firework
display, a Swingboat, Shooting Gallery and a Refreshment Stall. The Market Place was decorated with flags and bunting, the Market Cross had a decoration worthy of it's grace and reputation as a "town relic".

The committee produced a programme as follows.....

North Walsham Jubilee Celebrations Tuesday 21st June 1887
8.am Communion. 11.am. United Service of Prayer and Thanksgiving.
After the Service all persons are requested to keep clear of the Market Place so
as not to interfere with the preparations for the Dinner at 1pm. Grace will be sung at the sound of the Gong. During Dinner the general public and those without tickets are requested to keep to the pavements. After Dinner the Health of the Queen will be proposed and drunk and the National Anthem played. After the National Anthem it is desired that all will leave the Market Place in procession with the Band, in order to facilitate the clearance of the tables. Sports will begin at 3 o'clock in the Recreation Grounds which will be open from 10am. to 10pm. The Market Cross and Town will be illuminated at 10pm. and coloured fires will be burned in the Market Place at 11pm. The National Anthem will be played and sung at 11.30pm. It is requested that the decorations not be interfered with in any way. 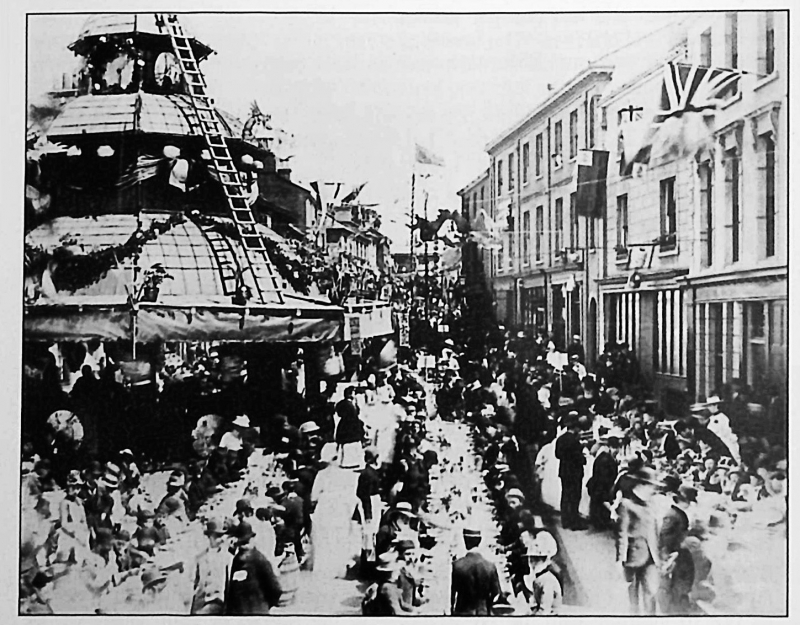 The weather on 21st June was all that could be wished and over 2000 people attended the celebrations. The Market Place was lavishly decorated with Chinese and Japanese lanterns, umbrellas, evergreens and flowers mingled with flags and bunting. The Band of the L Company, 3rd. Voluntary Battalion of the Norfolk Regiment was stationed during Dinner on a platform raised to over 9ft. in front of the shop of Mr. T. E. Whittleton (butcher).
After the Dinner the Band led the procession to the Recreation Ground for the Sports, and most of the stewards, carvers and waitresses then dined below the Market Cross. In the evening the Market Cross was seen to great effect. Illuminated, it's lines were picked out with coloured glass lamps, the soft effect enhanced by the foliage and Chinese Lanterns festooned about it.
The sum of nearly £200 was collected towards the festivities, besides which, the Beer was given and several prominent townsmen assisted with the free labour and materials. Altogether it was considered that the celebration had been carried out on a scale ' of much liberality and enthusiasm'. The success and satisfaction which resulted being enhanced by the fine weather on that Tuesday 21st. June. The decorations were allowed to remain until the following market day 23rd. June, when the town was once more illuminated. On the 20th July at the King's Arms Hotel, the last committee meeting was held. The accounts were presented and all other matters finally disposed of. The committee members wound up the evening with a banquet at the hotel.