You are here: North Walsham & District Community Archive / Other Stuff!! / In the Press / NORTH WALSHAM 19th C. / The Fisher Theatre 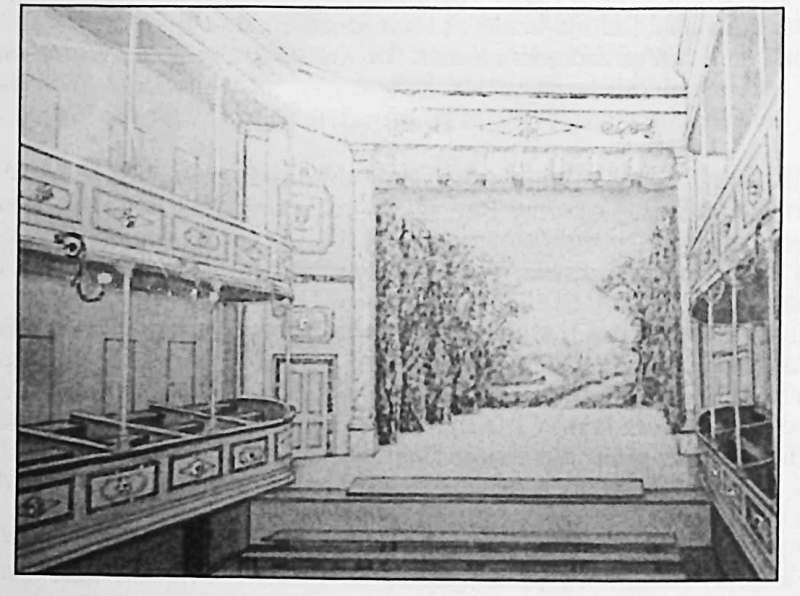 There must have been an air of excitement in North Walsham on the 6th May 1828 because on that evening The Fisher Theatre was to open. Built in what is now known as Vicarage Street, the theatre was owned by the Fisher family, a group of entertainers well known throughout East Anglia.

David Fisher I the founder of the group, was born in Norwich in 1760. He trained as a carpenter but with his fine singing voice and an interest in the stage he joined a theatre group, The Norwich Theatre Company. From this beginning he moved to work with a group run by William Scraggs and, in due course, became manager and went into partnership when the group became known as Fisher and Scraggs Company. They became famous for the high standard of their acting and also for the excellence of the costumes worn in their productions. Most of the costumes, like the scenery were made by the company, who also printed many of their own playbills, two of the actors being trained as compositors. The partnership lasted for twenty years, until William died in 1808, although by this time the Fisher family had by far the greatest involvement as actors, singers and comedians. Following William's death David Fisher formed his own company and with great enterprise began building his own theatres. Until that time performances had been given in rented premises as the company moved from town to town. The first to be opened was in Lowestoft in 1812 and the final one was that in North Walsham, in 1828. Altogether, twelve theatres were opened, either newly built or converted from older buildings.

The theatres usually held about 300 to 400 people with two rows of boxes, a pit and a gallery (generally with benches) and a stage large enough to take sufficient scenery and numerous players which many productions demanded. Seat prices were quite high, having regard to the incomes of many families at that time, and theatre-going must have been for the better-off working class and for the farmers and gentry in the area. Boxes cost 3s.6d., upper boxes 2s.6d., seats in the pit 2s and the gallery Is. Performances were usually much longer than today; a double bill being commonly presented, with a song or dance between the plays. Thus, if they wished, patrons could attend for part of the evening, paying what is referred to on the play bill as, the second price. This gave Is. off seats in the boxes and the pit and a ticket for the gallery could be had for 6d.

The Fishers played at North Walsham long before the theatre was built as the town formed part of the Company's circuit. Amongst the productions performed in the winter visit of 1818 was Richard III. Those attending the opening performance of the North Walsham Theatre which comprised a comic opera called 'Sweethearts and Wives' followed by a musical farce. 'The Turnpike Gate', must have been delighted by the spectacle of the auditorium. A watercolour of that period (reproduced here) shows that David Fisher II had painted the interior in blue and gold picked out in white, with gold motifs. Oil lamps along the rows of boxes, together with candles and lamps on the stage must have given a wonderfully soft, glowing light as the audience settled in their seats that May evening in 1828.
The season of each theatre would last for two months, sixty days being the maximum period that travelling companies were allowed to perform in any one place. During this time between thirty and forty pieces would be given. No play being repeated except 'by desire'. Eighteen members of the family were acting with the company at one time. The complete circuit of the Fisher Theatres in Norfolk and Suffolk took the company two years to complete and the visits were often timed to coincide with fairs, the assizes or the races. Over the years, whatever was put on at Covent Garden or Drury Lane theatres came to East Anglia within a few weeks. The Fisher Company offered everything from Elizabethan plays to contemporary plays, operas, and farces.

Theatre-goers enjoyed seeing actors flying across the stage, falling through trap-doors and being caught up in all kinds of mechanical devices. The Fishers provided this spectacle to their patrons and most of the machinery used was made by them.

Bespeak performances were productions put on "by desire' of local gentry or an organisation that requested a play. A party booking would be made and on the evening chosen the roads from some of the estates in the area must have been very busy with carriages carrying the theatre-goers. No doubt, some of the passengers were members from the larger land-owning families in the neighbourhood such as Lord Suffield and his family, the Macks, or the Wodehouse family who frequently stayed at Witton Hall. Perhaps even the Coke family from Holkham, whom it is known often attended the Wells theatre with their guests when the Fisher Company were playing there. The ladies would have been dressed in their finery knowing their complexions and jewels would be enhanced by the soft glow of the lamps in the theatre. A playbill shows that on the 29th April 1830 by desire of Mr. and the Hon. Mrs Petre of Westwick Hall The Barber of Seville' and The Master's Rival' were to be performed at the North Walsham Theatre. There were also 'benefit nights' when an actor took the profits after management expenses had been deducted. These evenings must have been appreciated by the company as a way of augmenting their weekly wages which ranged from a few shillings to £1.5s. Performances were sometimes given for particular charities, for the poor of the town, for example. In April 1838 a production of 'Isabella' (or 'A Woman's Life') and 'A Day Well Spent' were given 'by desire' and for the benefit of the North Walsham Masonic Fund. Entertainments such as those described continued at the theatre for eighteen years after its opening and then, sadly, owing to a countrywide recession in the theatre it was necessary to close the Fisher circuit. All the theatres belonging to this talented family were sold. Built for £1,800 in 1828 the North Walsham Theatre was sold in 1845 for £400. The building was then used as the National School until the Board School opened in 1874.

The family, so talented, went on to individual careers in the theatre. Charles Fisher, who had become a general favourite for the last two seasons, accepted an engagement at the Princes Theatre in London. Some of the family emigrated to America, where they continued their theatrical careers. 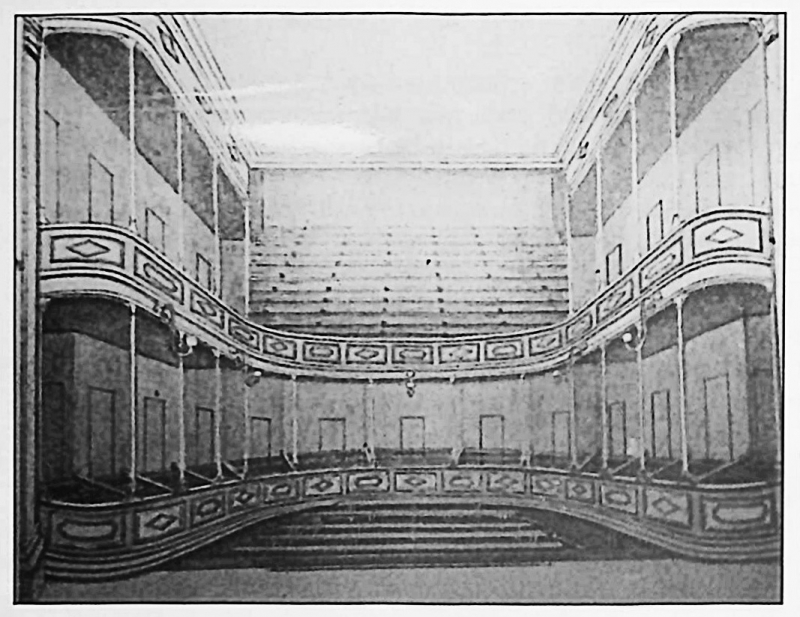 Sources:-
The Lamplit Stage, Moira Field, 1985 The Norfolk Chronicle, 1828 -1845 Eastern Evening Mail, 1907
The assistance of Moira Field is gratefully acknowledged; photographs and playbills are reproduced by courtesy of the David and Charles Fisher Theatre Collections. 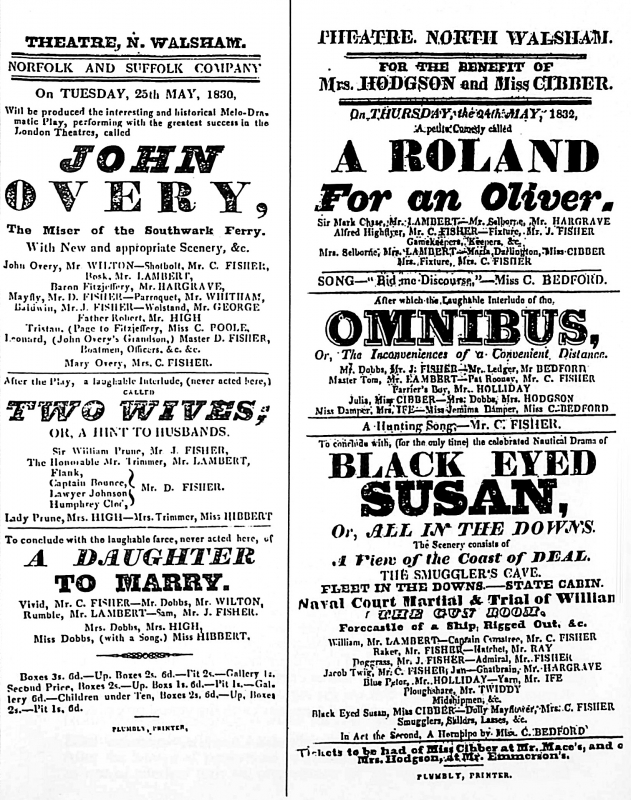