You are here: North Walsham & District Community Archive / Other Stuff!! / In the Press / NORTH WALSHAM 19th C. / The Canal

THE NORTH WALSHAM AND DILHAM CANAL

North Walsham and Dilham Canal    To Brickmakers, Navigators, Bricklayers, etc., The Committee appointed to organize the construction of the said canal from Antingham to Wayford Bridge, near Dilham....give notice that they are desirous of contracting with some person or persons for executing the following works: viz-
For the making and delivery of about a million of sound and well-burnt Building Bricks, to be made from brick earth to be furnished by the company, and to be delivered at such places on the said line of the canal as the Engineer may appoint.
For the cutting and execution of about Eight Miles of Canal
For the building of Five Locks in brickwork and masonry...
For the building of Seven Canal Bridges
(Norwich Mercury, 5th March 1825) 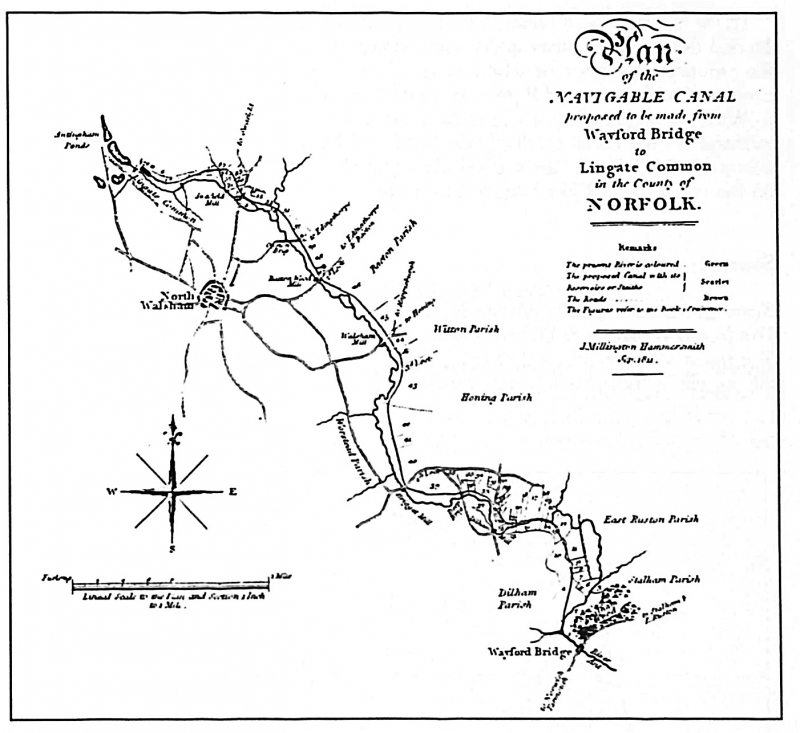 The Plan is reproduced by kind permission of Mr and Mrs T.R. Cubitt.

The building of the canal was first discussed in 1811 and following a meeting at the King's Arms, North Walsham, in December of that year an Act of Parliament was applied for to carry out the project. Several proposals were considered and plans drawn up: the plan reproduced here was one of the earliest showing the intention of the canal running from Wayford Bridge as far as Lingate Common in North Walsham. However, it was not until 1825 that work on the canal began and although it consumed some local labour, over 100 navvies were brought from Bedfordshire by the contractors. The project cost £32,000. The canal was formally opened on the 29th August 1826 with a great deal of pageantry as a procession of boats made their way from Wayford Bridge to Antingham accompanied by the sounds of music and cheers from spectators; the occasion ended with a dinner at the King's Arms attended by Lord Suffield, Colonel Wodehouse, the Hon. Edward Harbord and other dignitaries.
Tonnage and lock dues were considered expensive so that coal and other heavy goods were often taken overland from the nearby coast having been landed on the beach. The scale of charges in 1837, for example was -

These charges were reduced in 1844, when limes and manures went down by Id and the costs for other goods went down by a similar figure. In the middle of the century a number of wherries regularly used the canal and in 1874 it was deepened at Dilham and Ruston so that larger wherries could get upstream.
With the expansion of the railway network in the last quarter of the century tonnage on the canal gradually declined and by 1893 boats had ceased to trade above Swafield. Bradshaw's 1904 Canal Guide said 'there is not much trade done on the canal'. In 1935 navigation ceased.

Sources:-
Norwich Mercury 1825; White's Norfolk Directory 1845; The North Walsham & Dilham Canal, R. S. Joby, 1977.
(For those interested in a detailed account of the building and history of the canal this excellent short book is recommended).