You are here: North Walsham & District Community Archive / Other Stuff!! / In the Press / North Walsham Past & Present / THE NORTH WALSHAM & DILHAM CANAL

Ten years before this canal received its Act, Arthur Young wrote: "Without coal mines, or a great demand for coals, lime etc., and the establishment of immense manufactures, canals are too precarious a speculation for the ready advancement of great subscriptions. Yet in 1811 a meeting of local farmers and businessmen on 16th of September petitioned Parliament for permission to build a canal alongside the River Ant from Wayford Bridge to Antingham Ponds, this being granted a year later. North Walsham had been recently enclosed, so it was natural that the list of 57 subscribers should contain the names of many of the largest landowners, such a Cubitt and Bell, who were also Turnpike Trustees.

The advantage of having a canal was that the cost of carrying marl, dung and other farm materials was less than a third of the cost of horse and cart transport, farm produce transport costs being reduced by half. In addition the likelihood of breakage was less by canal. Coal was however still brought overland from beached schooi-ners at Mundesley, the four miles by horse and cart being much less costly than the long canal route from Yarmouth.

It took three years between the granting of the Act and Mr Millington's plan being presented. A further nine years elapsed before the plan was finally adopted and the money raised. In 1825 work started and 14 months later the canal was opened to Ebridge, on the 14th of June 1826, being completed to Antingham Ponds on the 2 9th of August, when the opening was celebrated in style by a procession from Wayford Bridge with celebrations in town to follow. Such local delays were as common in canal building as they later were in local railway building. £32,000 had been raised from the district, a very considerable sum for the period. 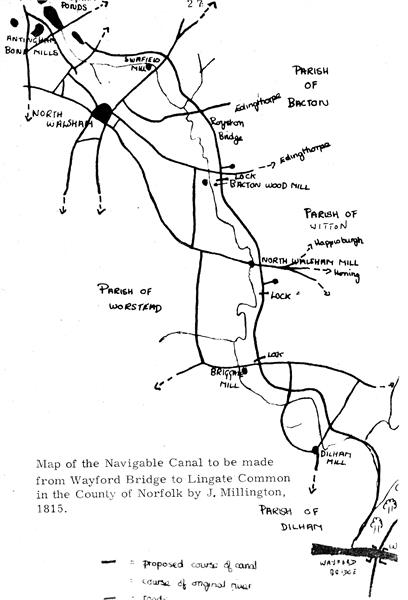 Unless things went well it was often difficult to obtain the money promised from farmers and shopkeepers, who were often in debt themselves.

The Ant powered several water-mills and these were directly served by the canal which brought grain or bones to them and took away flour and bone-meal. Small 14-ton wherries operated on this small 9-mile . waterway. How they did it is a miracle, as one can investigate by measuring the river at Swafield Bridge. The flow of the river is so small that only 3 wherries a day could sail in either direction, but this was adequate for the district. As late as 1888 £525 was collected in tolls, more than covering the £358 for maintenance. 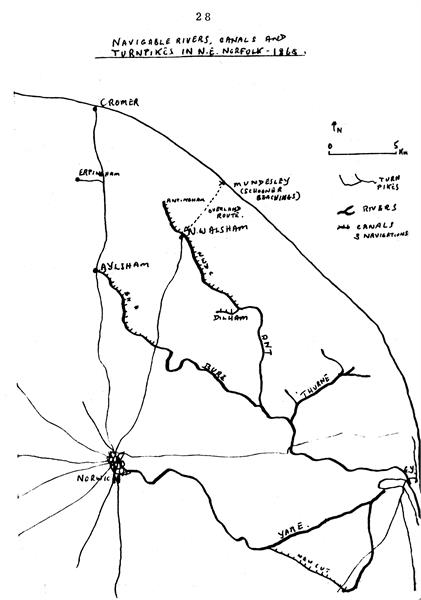 The high hopes of the early owners were not realized, a return of under £200 a year on over £30, 000 capital was well under 1%, In the circumstances the undertaking was put up for sale in 1866 after a private Act had been passed. The capital remaining was to be divided among the shareholders, many of whom could not be traced. The cheque for this dividend was handed to a Mr Turner, the principal clerk. He paid 55 of the 446 shareholders '. but absconded with the remaining £554-8-QEventually in 1886, Edward Press, the miller, completed the purchase of the canal for a mere £600.

The coming of the railway in 18 74 had not at first hurt the canal greatly. It had most of its customers along its banks and served an area that did not get its own railway until 188 3. Profits were too small to allow for major improvements. When these and heavy repairs were required to the section above Swafield Bridge in the mid-1890s, this section was quietly abandoned and is today difficult to trace.

By 1904 it was reported that "There is not much trade done on the canal" by Bradshaw's Guide. This decline continued and the canal did not partake greatly in the. Broads holiday boom which started at the end of the last century. Guides of the period warned of the narrow waterway above Wayford Bridge and few ventured to use the locks. It was so much easier to navigate in other parts of the Broads. The Press Brothers did however benefit the town by running some of the early pleasure wherries and had a dry dock at Ebridge for repairs. Traffic continued to decline until 1935 when the last regular wherry ceased. The route can still be easily traced. Many of the mills are still there, as are the broken locks. The old granary at Swafield Staithe gives a got idea of the buildings once used.

There has been talk from time to time of reopening the canal to pleasure traffic. However the cost of repairs alone is enough to frighten all but the most determined.; Much would have to spent on dredging and on improving the rate of flow By pumping in additional water. 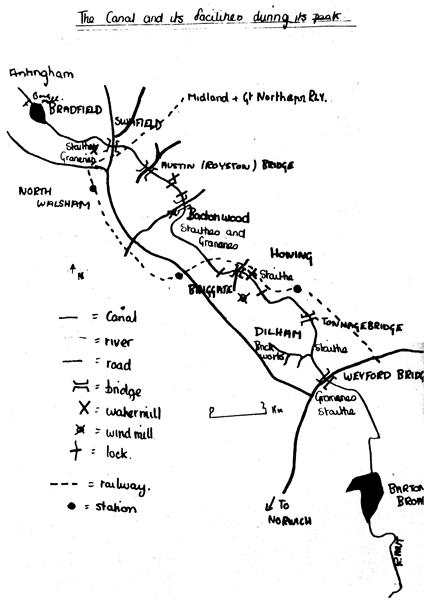 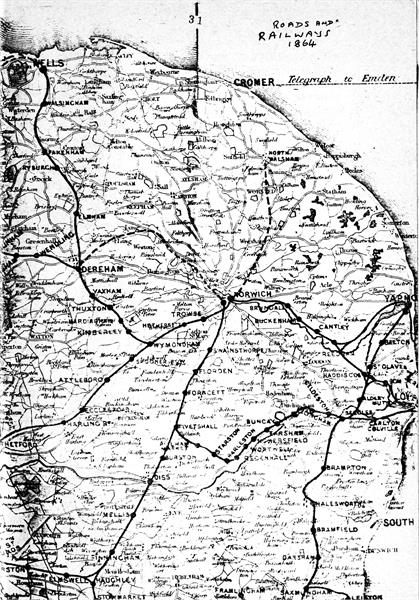