When the glaciers of the Ice Age melted, they left the North Walsham area with up to 50 metres (170 feet) of sand, clay and other material on top of the chalk bedrock. Given that the height of North Walsham above sea-level is less than this maximum thickness, North Walsham's site would be under the sea had this deposition not taken place. If you wish to see a cross-section of this material, a study of the coastal cliffs at West or East Runton will help make the figures real and allow a study to be made of the very diverse materials which go to make up this covering of the underlying rock;also by studying the rocks in detail, one can work out the processes that were at work during and after the Ice Age which ended over 10,000 years ago.

Deep under us, at a depth of thousands of metres, there are very ancient rocks similar to those in the more westerly parts of Britain. Between these and the Chalk, which is the oldest rock that appears at the. surface in this district, there are rocks which probably contain natural gas and possibly some oil. These rocks were deposited over 200 million years ago when what is now Norfolk was a tropical island on the edge of a vast waterlogged jungle. The jungle became coal;gases coming off from this coal later became trapped in pockets underground and gas from these has now been extracted from under the North Sea, being brought ashore at Bacton. Some of this gas is condensate and is piped to North Walsham, being sent on by rail to an oil refinery near Tilbury.

Other rocks such as sandstones, limestones, shales and clays were laid down one on top of another until about 100 million years ago, when an unusually pure limestone called chalk was laid down in a warm, clear sea. Sponges and corals, as well as other warm water creatures have been found in the chalk. The lack of sand and mud particles in the chalk indicates that the sea was clear. Because of this, we also know that it must have been either a long way offshore or if not, then the land must have been a desert, with no rivers to pour sand and mud into the sea. The type of chalk immediately under North Walsham is made up largely of coceoliths and other tiny plants and animals that, once lived in the sea. But there are also massive flints called Paramoudras, a metre (3 feet 3 inches) long, 30 centimetres (1 foot) in diameter with a core filled in with hardened chalk. How they formed is still in dispute, but it is possible that the material comes from the skeletons of sponges and formed into large irregular nodules (lumps) in the joints between the blocks of chalk. Paramoudra chalk can be seen at low tide on the beach between East and West Runton. Paramoudras have often been collected and used as outdoor flowerpots in local cottage gardens.

The chalk also contains large fossils as well. Belemnites were relatives of the modern squid and cuttlefish. The belemnite 'guard' (see illustration below) is often found in chalk pits and on the beaches where they are locaUy called 'thunderbolts'. The oval sea-urchin(echinoid) called Echinocorys is another common local fossil, as is the burrowing sea-urchin Micraster. The former lived on the sea floor, the latter under it. Examine fossils carefully to see why we think this was so. Sponges and the now-rare brachiopod were also common in the seas where the chalk was laid down. 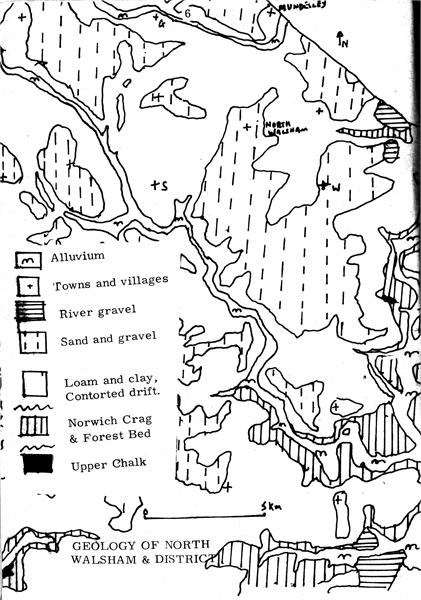 The youngest chalk under North Walsham is about 80 million years old;the Crag which is found above the chalk is only about 1 million years old, indicating that there must have been erosion of any rocks laid down in the long period between the two. Above this is the Cromer Forest Bed series which when studied shows that the climate was gradually getting colder, with tempieiuaie.' spells in between. Many of the creatures living at this time can be seen in fossil form in the Norwich Castle Museum;they range from cold-water shellfish to deer bones and mammal teeth.

North Walsham was probably covered with ice twice during the glaciation of Norfolk. These were the first two advances of the ice, known as the Cromer Advance and the Lowestoft Advance. The next advance, known as the Gipping Advance, stopped short at Cromer to form the Cromer-Holt Ridge, a Terminal Moraine made from rocks left by the glacier at the point where it stopped for a lengthy period. Thick, stiff Boulder Clay and masses of chalky material were left by the glacier when it melted locally. Sands and gravels washed souhwards by water melted from the glacier then spread out over the district. In the cold, dry period which followed, the winds whipped the finer material away in some places, re-depositing it in others to form Brickearth, from which so many local bricks have been made. Floods from the melting ice carved broad valleys through the soft sands and gravels and clays each spring, as can be seen in the valleys on either side of North Walsham, the Ant and the Scarrow Beck. They follow a totally different route from that followed by rivers before the Ice Age, which probably flowed from west to east.

After the Ice Age the climate started to become warmer. We know this because tiny grains of pollen became trapped in mud and peat in local river valleys. This pollen is nearly indestructible and the grains of the different plants -can be recognized by experts. v Those which were laid down soon after the Ice Age rest just above the glacial material, while those which are more recent are found higher up. By counting the grains and identifying them, it has been found that the early plants were like those in the Arctic today while later the conifer trees, now seen mostly in Scandinavia, were dominant;gradually the familiar deciduous trees such as the oak appeared about 10,000 years ago. The climate, at different times, appears to have been both warmer and cooler, wetter and drier than it is today according to the pollen analysis. Scientists at the University of East Anglia tell us that the Ice Age is far from finished and that we are only in an inter-glacial period. During a wetter and cooler period great thicknesses of peat were formed in the Ant valley at Swafield and other places. This rotted vegetation, when dried, was used as fuel in the Middle Ages. 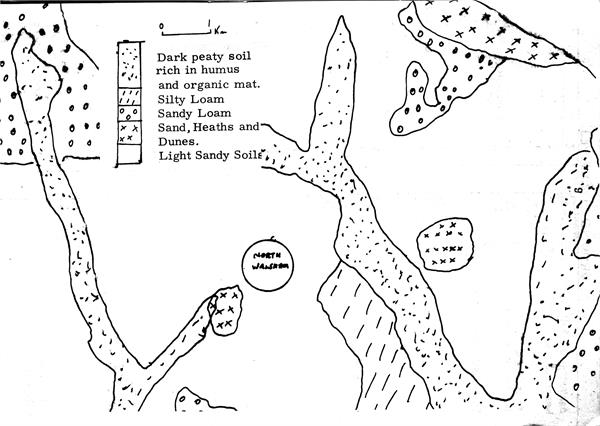