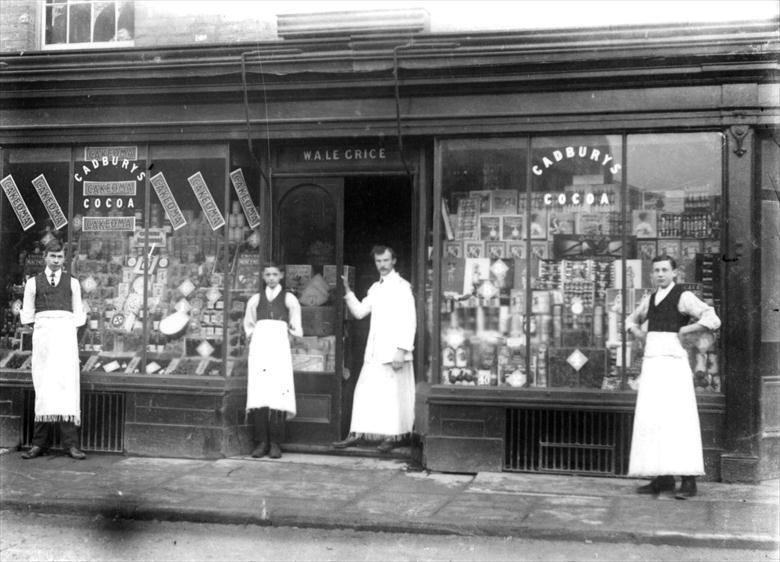 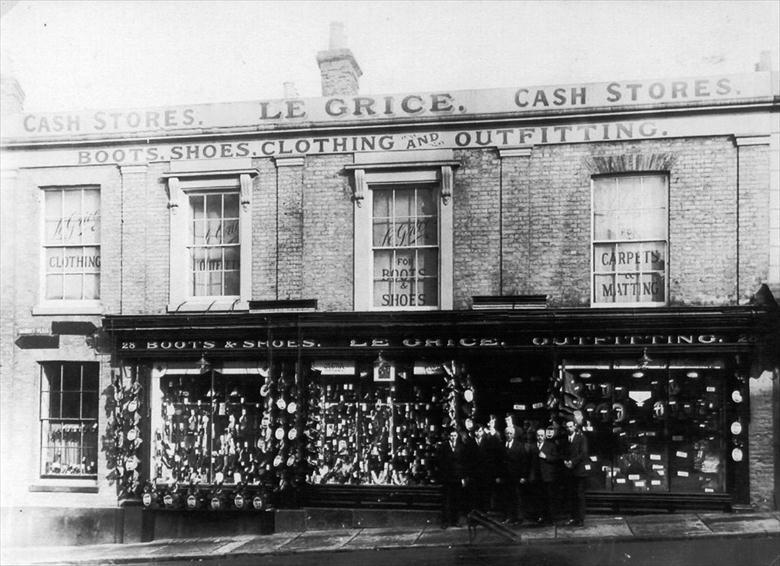 You are here: North Walsham & District Community Archive / Other Stuff!! / In the Press / The LeGrice family

Please note: This article was written by Mike Ling in 2003 so some of the current references may not be so current!

The LeGrice family have been able to trace their name back to 1066 when they came across with the Norman invasion. At that time the name was spelt LeGrys and continued so until the family became nonconformists in the 1600's. They possessed their own coat-of-arms and one example is to be found in Langley Church, near Loddon.

Although the family became centred in the Great Ellingham area, a Charles LeGrice was born in Attleborough in the mid-1800's where he became a grocer, draper and agent for Gurney's Bank. One of his four sons was William Alexander LeGrice who, in 1898 moved to North Walsham and became a grocer in Church Street, as seen in photograph 1 which was taken about 1910 by R. M. Ling, the author's grandfather.

Around 1900, William Alexander LeGrice married Ellen Mary Fuller. Ellen Mary's mother was a Bullimore before marriage and her uncle ran two businesses in the Market Place:- a drapers in Norfolk House (later Fuller's Drapers and now the Country Mutual Insurance Brokers) and an outfitter, boot depot and carpet stores at "Chamberlin's Old Shop" at No.28 Market Place which expanded to include a group of properties that are now Hughes Electrical, The Sue Ryder Shop and the recent Digital Phone Company.

It is interesting to note that J. Chamberlin appears as a tailor in the directories of 1838, 45,& 50 and William Bullimore, also becomes listed as a tailor, from 1845. By 1883 the name Chamberlin was no longer listed but Bullimore had become Bullimore Wm and Son and in the 1900 directory the
business was described as "General Drapers, Milliners, Tailors, Outfitters, Boot Depot, and Carpet Stores at Norfolk House and Chamberlin's Old Shop".

By 1912 William Alexander had also taken over the outfitters at Chamberlin's Old Shop (photo with next article) and ran the two businesses until the late 1930's when the outfitting business closed. The grocery business continued becoming familiar for many years as "Rusts" before later becoming "The Dutch Oven" and, now, "Christopher's".

Photograph 2, taken in the late 1930's, relates to the previous article and shows the outfitters shop in the Market Place with William Alexander LeGrice and his son, Charles on the right. As mentioned in the previous article, William Alexander LeGrice's second son was Edward Burton. Born in December 1902 he lived with his brother and sister above the grocery shop in Church Street. Edward Burton's first school was one run by Miss Hunter, which lies somewhere beneath the New Road Bowling Green. From there he attended a prep school run by Miss Gladys Smith before moving on to the Paston School where he excelled.

At 13 years of age he passed the Junior Cambridge, at 14 he passed the then new subject of Agricultural Science with honours, and at 15 he passed the Higher Cambridge exam before subsequently leaving school before his 16th birthday. Edward Burton was determined to become a nurseryman and his father secured him an apprenticeship with the Morse family, who ran a very famous nursery at Eaton, near Norwich, with a particular interest in roses. The apprenticeship cost his father 30/- (£1.50) per week plus his lodgings and lasted a year. He spent a second year with Henry Morse and worked with the three sons who became lifelong friends. In 1920 Edward Burton started on his own when his father bought him 10 acres of good, but very run down, land on Yarmouth Road. Each year he took in just two acres and gradually cultivated the whole site, which became Roseland Nurseries. His first commercial success came in 1936 with a single pink rose that he named 'Dainty Maid' and one that was so successful that it was still being recommended in the 1960's.

The family were staunch Baptists for many years and for 19 years the Meeting Hill Chapel had Rev James McClinon as Pastor. He had three daughters - Charles William LeGrice married Marion and in 1938 Edward Burton LeGrice married Ellinor Margaret McLinon. Just before the Second World War he bred a yellow scented hybrid Tea Rose which he named 'Ellinor' after his wife.

During the war the rose nurseries had to be put to agricultural use -the roses were ploughed up and the land was principally used to grow onions. Still a master of his craft, he chose an onion that had a convex, rather than a flat, base which considerably increased the yield. After the war the nurseries were re-established and a very successful period ensued. In 1970 the company also purchased 45 acres on the Norwich Road and in a 1971 advert boasted that E B LeGrice (Roses) Ltd had 57 acres of nurseries with "50 years of Service and Satisfaction".

Soon after this the original Yarmouth Road site was developed into housing, but its previous use is indicated by two of the roads being named 'LeGrice Crescent' and 'Ellinor Road'. The third road of this small development is named 'Sampson Road' after Matron Sampson who was the matron of the North Walsham Cottage Hospital from its opening in 1924 until well into the 1950's. His most successful rose was the floribunda 'Allgold', still one of the best yellows, whose parent was the above mentioned 'Ellinor'. He was a member of the Royal National Rose Society for over 50 years, becoming in 1965 a vice-president, and received the Queen Mary's Commemoration Medal as a British Rose Breeder. He won medals not just in Britain but also in New Zealand, USA, Germany and Japan. As one of the world's greatest hybridists he introduced new colours including a purple 'News', various browns with 'Amberlight', 'Vesper' and Jocolyn', a lilac in 'Lilac Charm' and a grey in 'Grey Dawn'.

Before his death in 1977 he had been joined by his two sons, Jim and Bill, who are still involved in horticulture, and the Norwich Road business still thrives under the banner of The North Walsham Garden Centre.

Edward Burton LeGrice was certainly a great son of North Walsham and in the words of his son Jim ... "How nice to be remembered as the man who brought more colours to roses than any other".