You are here: North Walsham & District Community Archive / Other Stuff!! / In the Press / Strawberry Hall to the primros...

Strawberry Hall to the primrose woods.

A  springtime walk,  which began at North Walsham, skirted the Westwick cherry orchards, white with blossom, and finished at Worstead.

LOOKING back now, there's little I can remember about the cottage itself, except the blue paint peeling from the doors, the tiny windows, the absence of a television aerial, daffodils scattered among the grass. The garden seemed to belong to a countryman who had seen enough of nature in the course of his day's work, and was thankful to be indoors by his fireside out of wind and rain and sun afterwards.
But what a setting! The cottage grew out of the fold of a hill; it was protected from cold winds by some of Norfolk's pleasantest woodlands— Lord Anson Wood to the north, Perch Lake Plantation to the east, in all their spring glory. Between them stretched the long track churned by timber drags which I had followed; it continued now, with fields on my right, towards Swanton Abbot, Half a mile further on, the going having improved somewhat, a compromise had been reached with the postman in a neat wayside box "Letters - Strawberry Hall."
Strawberry Hall . . . What was its story ? Was its name a wry joke, as so many of the teasing countryside names one comes across in one's rambles seem to be—Coldharbour Farm, Grub Street, Misery Corner? On this wonderful morning of sunshine and piled white clouds this cottage called Strawberry Hall seemed the most desirable of residences.
I had set out from North Walsham. The fine Saturday morning had turned its pleasant old town centre into a human ant heap. For a few minutes I dallied to enjoy the cross-section of humanity (so much more evident than in a large city), the air of wellbeing and post-war prosperity. A mile later, at Tungate, I tired of the road and found the route of the j old M. & G.N. more attractive.
So, with Felmingham Church tower rising like a dark bastion beyond Bryant's Heath on my starboard bow, I came to the delights of North Walsham Wood. Its beauty lies in its rich variegated maturity. Here, where the line disappeared in a cutting almost overgrown with gorse, were tall Scots pines among the oaks, honeysuckle trailing over the bracken floor. A little further on were deep carpets of heather under birches.
Some North Walsham people say lilies of the valley still grow wild in these woods, but others maintain that the spot where they grew has been despoiled by timber felling—certainly large areas are now cruelly bare.
On, past Strawberry Hall, I came to Swanton Hill, the top end of the scattered parish of Swanton Abbot. From this cluster of weathered old red brick cottages there were splendid views back to the woods and eastwards to the billowing white cherry orchards of Westwick. And a path set between steep banks led past an old post transformed with paint into a lady—she had a most realistic up-to-the-moment coiffure of ivy—to the church.
In the village I stopped for a drink at the Weavers' Arms — one of the most handsome village public-houses I have seen for a long while, and the interior is almost as attractive as the outside. Jovial, portly Mr. A. C. Welling and his pleasant wife are just the couple to run it.
"Yes, we get a good many customers," he agreed.  "Mind you, you have to be the same to everybody. There's a good pull-in and we're now the only pub open on this road between here and Aylsham."
After my sandwiches I pushed on along the country road to Westwick arch. Despite the hour, there was a cheerful nattering of tractors in the air and more of a gaod-earth smell than one normally expects so date in spring.
The map marks a footpath through the park eastwards from somewhere opposite the cherry trees, but apparently it has fallen into disuse. So from the arch I continued straight on, making a small diversion to admire the impeccable flintwork of the church tower and the setting of the church itself, with its hug-secret yews and backcloth of woods.
From here to Smallburgh the canners and freezers diversified my way. First a field of strawberries planted under ancestral oaks, then am expanse of pear trees almost in full bloom opposite the obelisk which rises above the trees on the edge of the park. (What a view at this time of year if it were still possible to climb the 90-foot lookout-tower, whose origins are shrouded in local legends.
Worstead made me sad. Sad about departed glory, about the green damp running inexorably down the walls inside the great church—sad with the very peace and beaulty of the broad street surrounded by noble houses, because (it seemed) this was a beauty more of death than of life. Sad even though, in all this district, men, women and girls—used no doubt to the communal life of fruit farm and canning factory—greeted me cheerily.
But, lower down the village though contiguous, before you come to the primrose woods and the smart farm buildings, a compact council estate has grown up. A belt of conifers behind gives snugness and definition. Here (I thought) is where the old tissues can start growing again and a new community life be born—its prosperity based on the great modern food industry, not on clothing. 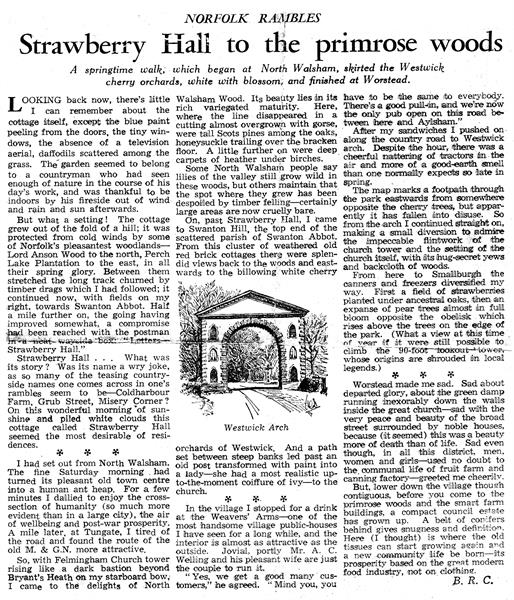