Market Place Improvements c1922
Taken about 1922, this photograph shows work in progress providing the Market Place with its first metalled surface on a sunny winters afternoon.The steam roller was probably provided by W.B.Gaze who is listed in the Trade Directories of that times as "Engineer, Threshing and Road Rolling Contractor". Their "works" was on the Bacton Road, part of the area which is now Antingham Drive.In the background are four identifiable properties. In the centre is Stead & Simpson with its "new" two storey format (up to 1912 it was a three storey building with eaves continuous with the adjacent building. Stead & Simpson is listed in the trade directory of 1892 but their archives record their first manager, Arthur Ernest Groom, as starting in May 1903. The previous occupier, John Dyball, Earthenware Dealer, had operated from there since 1883 and, later, continued his business some three doors up the Market Place until 1929.To the left of Stead & Simpson, is the office of Herbert Plumbly, great uncle of R.M.Ling (ll), who was Auctioneer, Cattle Sales, Estate Agent, Valuer and Farmer who, then, lived at Ruggs Hall, Felmingham and , later, moved to the White House on Yarmouth Road, just a few score yards from his cattle market which is now under Roys.On the far left is W.A.LeGrice, General Outfitters, father of E.B.Legrice of rose growing fame.Through the legs of the Market Cross can be seen Star Supply Stores (Star Tea Co. Ltd.) who had traded in Market Street from 1912 and, by 1922 had moved to their Market Place property after it was vacated by the London Provincial Bank 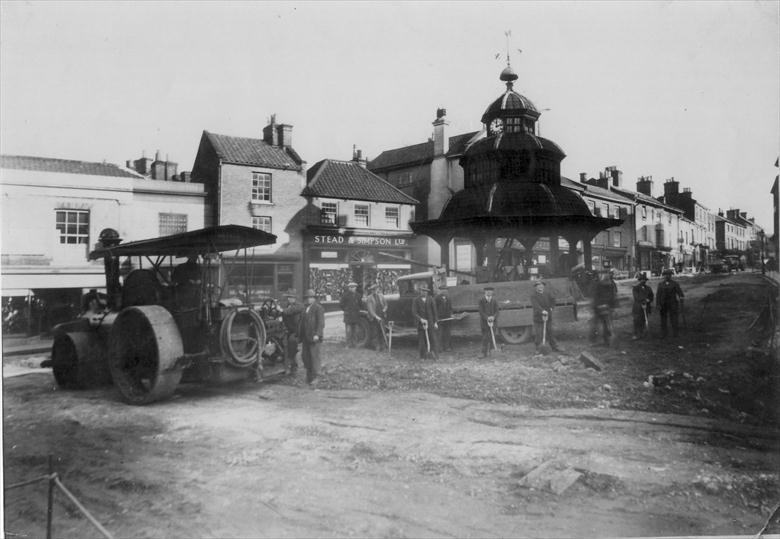 This archive item has been viewed 2982 time(s).