The North Walsham Flush and Brush Brigade
Taken about 1912, this photograph shows two very important people of the community, Bruff Hewitt and Dan Mount. Their daily job was to flush away the rubbish in the surface drain that ran down both sides of the Market Place, Market Street, Nelson Street (the first 120 yards of what is now Mundesley Road and then along Gas Works Loke, via Catch Pit Lane, to a small stream that led northwards to the river Ant at Swafield. Catch Pit Lane has now been renamed Northfield Road.

The two men can be seen filling their barrow from the Town Pump which stood a few yards before Broadland Travel. The pump was said to be connected to the only well in the town that never ran dry. About 1930 it was discovered that the water was not fit for human consumption. Not surprising, really, as they had been burying people within 15 yards of it for most of the last millennium.It is a sobering thought that, in those halcyon days, the removal of most human waste relied on the night-time visit of the "Honey Cart". It was not until 1927 that a storm water and sewerage disposal scheme was laid down. 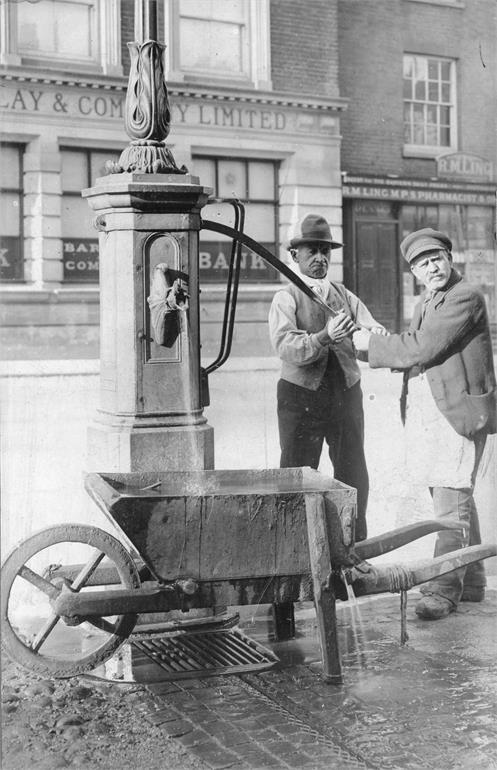 This archive item has been viewed 572 time(s).