This lovely panoramic photo of The Bull Inn was taken around 1910. It stood on the corner of Grammar School Road and King's Arms Street. The first record of The Bull Inn is from 1785 when it was advertised for sale. It closed and was demolished 1970/1971 to make way for road improvements and a mini-roundabout. The pub held an extension for
Thursday Market Day afternoons from 2:30pm to 4:30pm. Many stories have been told of how a rogue bullock, or two, would enter the pubs open front door into the bar as the cattle were driven along Grammar School Road on their way to market. Geoff Griston also adds; "I remember one Thursday around 1951 when nobody closed the Paston School gates, and the headmaster and his wife were not pleased because the cattle all came and churned up the lawn. The cattle saw that there was an escape route. We were in the classroom in the main block and could look out the window and see the cattle churning up the grass and reluctant to leave. It was wonderful."

In the 1940s The Bull Inn was kept by Bella and Walter 'Stukie' Stewart in the forties who retired to Marshgate and handed over the pub to Jenny and Arthur Rudling in 1959, who kept the pub until it finally closed.

"Morgans Ales" on the pubs sign refers to the Norwich brewery in King Street, founded in 1720 and acquired by the Morgan Brothers in 1844. "Morgans Ales" had become "Watney Mann Ltd." by 1963 and became "Norwich Brewery Ltd" in 1976 before finally closing in 1985.

The building directly behind (with no windows) still stands, later becoming a butchers and is now part of the Paston College complex, it still retains the chequered flooring from it's butcher shop days. The trees on the left were removed to allow for the building of the Catholic Church in 1935. The house to the left, further in the distance, is Holly House which was demolished in the 1930s to make way for the Paston College 1939 Building. The building on the far right, in the foreground, still stands and is now "Jade Garden". At the time of this photo it was "Sparlings" gents outfitters and the shoes can be seen displayed outside the front door. "Sparlings" was owned by Allan Moore, “you know the fellow”!

This archive item has been viewed 2675 time(s). 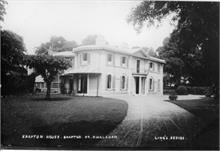